A photograph recently surfaced on primatology.net which stirred up a deep and primal sense of anxiety over here at Nerd Out With Me.  An orangutan in Borneo was soul-captured (read: got his picture taken) while SPEAR FISHING.   That’s right, folks.  These scary-strong apes are now wielding long, pointed shafts with what I am assuming is deadly force since, you know, they are hunting with them. 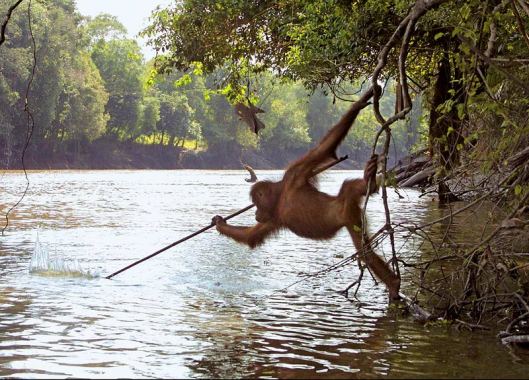 Now, to be fair, that particular orangutan purportedly didn’t do a great job wielding his new weapon tool, but he did later use it to spear fish stuck in a net.  Also, this is not the first time orangutans have been seen to use spears in this way.  There’s been extensive documentation of tool use among other great apes, but this learned cultural skill in orangutans has never before spread beyond the island of Sumatra in Indonesia…until now, that is.

So rather than worry that orangutans are becoming expert spear-men  we need instead only worry that learning the way of the warrior wasn’t an isolated incident, but is an inherent product of orangutan culture, which is actually much more alarming!

Of course this and other accurate terrifying information can be found in the much better-written article at primatology.net.  We needn’t fear zombies, super-viruses or nuclear war.  What should keep us up at night are orangutans!